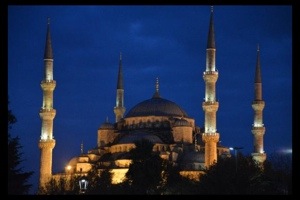 2014 is a year of adventure, of going places I never knew I would (Istanbul) and doing things I never thought I would (working in fashion), and I feel as if a lifetime of choices (good and bad) have brought me here to the road not taken …

Two roads diverged in a yellow wood,
And sorry I could not travel both
And be one traveler, long I stood
And looked down one as far as I could
To where it bent in the undergrowth;

Then took the other, as just as fair,
And having perhaps the better claim,
Because it was grassy and wanted wear;
Though as for that the passing there
Had worn them really about the same;

And both that morning equally lay
In leaves no step had trodden black.
Oh, I kept the first for another day!
Yet knowing how way leads on to way, I doubted if I should ever come back.

I shall be telling this with a sigh
Somewhere ages and ages hence:
Two roads diverged in a wood, and I—
I took the one less traveled by,
And that has made all the difference.

I work, I travel, and as often as possible, I make the two intersect. View more posts

2 thoughts on “The Year of Adventure”

Welcome to the prettiest place on the internet

My sometimes Strange, but usually Wonderful Experiences and Adventures as I Travel through this amazing World we live in.

Some kind of journey.

O at the Edges

Musings on poetry, language, perception, numbers, food, and anything else that slips through the cracks.

G’day, you’re at the best wine blog ever! We're all about wine; without the wankery.

she is confidence in shadows.

by po'E.T. and the colors of pi

Where In The World Is Laidback Luke?