So, You’re Considering a Family Cruise

When I read the late David Foster Wallace’s essay on cruising in Harper’s, Shipping Out, On the Nearly Lethal Comforts of a Luxury Cruise, I laughed with the deep understanding that comes from having been there, and felt all of that.

Yet, two months ago*, there I was, planning a cruise with my family of four for Christmas. Our lofty goals of a cruise through the Mediterranean were quickly tempered by the reality of traveling with two tweens through museums, UNESCO sites, and endless cathedrals.  Once reality struck it was decided that we’d start with a beginner’s cruise: a week in the Caribbean followed by a week of Disney magic (before they become too old to enjoy the Mouse).  Perhaps I should have lobotomized myself in anticipation.

As a mother, and frequent traveler, I have learned that the secret to traveling well with

*Note that this article was originally written in 2015, since then RC has rolled out a more flexible upgraded dining package.

My Theory of Traveling Successfully with Kids

When it comes to travel, I firmly believe nothing of value is gained by leaving your hard-earned vacation days to the fates. That said, after months of research I selected the Royal Caribbean, Independence of the Seas six night, seven day cruise to Grand Caymen, Jamaica, and Labadee Haiti. I booked two adjoining rooms (6575 and 6577 for those who know this ship). Our trip would be followed by five days in Orlando, Florida at the Universal Cabana Bay, and a night in Fort Lauderdale at the Marriott Pompano Beach (gotta use up those points), heading home on Christmas morning. 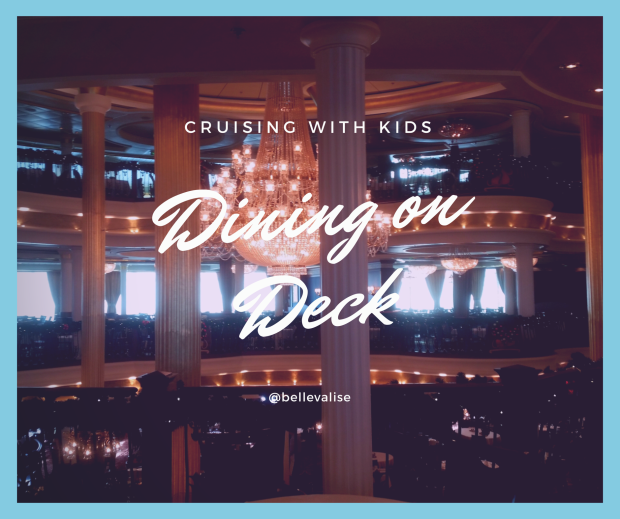 The Royal Caribbean group has decided to make understanding their dining program unnecessarily complicated and difficult, but I will not be deterred when there are bloggers who’ve come before me who’ve simplified the information that Royal Caribbean has not.

In order to simplify things for those that follow … here’s what we found:

The Independence of the Seas, offers a number of varied dining options:

The Main Dining Room (Breakfast lunch and dinner, Deck 3-5) The three-deck-high dining room (called Romeo and Juliet on Deck 3, Othello on Deck 4 and King Lear on Deck 5) is open for breakfast, lunch and dinner.

Breakfast: features eggs Benedict, pancakes, granola, and omelets as well as a daily special such as chocolate-chip pancakes, a bacon and gruyere quiche (which was quite good), or almond-crusted French toast. Seating is available for individual parties or communal seating. You can order mimosas or bloody marys with minimal hassle since the breakfast crowd is mostly at the buffet. 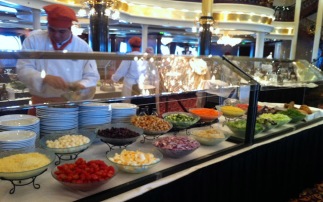 Lunch: the Independence offers Brasserie 30 (the Dining Room called by another name, but still smelling the same). Lunch features a menu/made-to order salad bar combo where guests pick their toppings, and a crew member mixes it together.  The salad bar also features a light antipasti selection. The set menu features traditional lunch entrees, pastas, soups, salads, sandwiches and desserts and a two course meal can be completed in 30 minutes.

Dinner: passengers can choose between two standard dining times (6 and 8:30 p.m.) or My Time Dining, where you can make a reservation to dine at different times each day. In selecting My Time dining you give up the cruise tradition of having the same waiter and set table mates each night and can sit by yourselves at tables of two, four, or more. With My Time dining gratuities are paid up front (if you’re one of those obstinate sorts who asks to have that removed so you can tip based on service, I saw the email that goes out to the entire service crew that you’ve requested that, so BEWARE).

The dinner menu features salads, soups, appetizers for starters, classic entrees, and desserts. Each night new entree, soup, and starter options are introduced and there are also “every night” selections including vegetarian pasta, broiled salmon, chicken breast, and a sirloin steak.

Review of the Main Dining Room: Faux-tastic … the dining room attempts to look elegant and sophisticated, but rolling trays of detritus are stacked up just feet from where you’re dining. The constant table turnover makes the room unpleasant and loud, and the service attempts to be five star, but with weird hangups (they squirt the ketchup for your fries for you rather than leaving the bottle or bringing a small ramekin of ketchup.  Why can’t I just have the damn ketchup bottle!?!)

Ordering a glass of wine (or God forbid, a cocktail) is an ordeal that requires a separate server, your SeaPass card*, and a hassle that becomes downright obnoxious by night four. Why do they make it such a hassle considering the servers are the same, they know your name and room number, and they’ve already seen your SeaPass card and therefor drink package half a dozen times by then! The food is fine, occasionally good, and I might have even had something that was great at least once. The dress code is weird; on formal night we were wedged between octogenarians in their tuxedos and ball gowns and a Danny DeVito look-alike in a T-shirt and shorts.

Independence of the Seas Windjammer Buffet

The Windjammer Café (open for breakfast lunch and dinner, Deck 11) is a traditional buffet that will ignite all of your “ick” sensors – think Food Court without the filter of price or quality.  People belly up to the bland servings of fake mashed potatoes, undercooked pancakes, and overcooked bacon and create Jenga-like towers of food that no human should ever consume.

I know that it is paid for in advance and therefore people want to “get their money’s worth”, but why does that have to happen all on one plate?  They aren’t kicking people out.  Fill your plate to a reasonable level, take a breath between bites, grease up your hips so that you can get in and out of your chair, and repeat.  No need to strain your wrist trying to wrangle that platter of bland, lukewarm fried chicken stacked over a cheeseburger, with a saddlebag of tater tots back to the table.

Jade: The buffet also has a section called “Jade” which cruise advertising attempts to feature as a separate restaurant, but it isn’t.  Jade is a row of about 12 “Asianish” options that represent Japanese, Chinese, Thai, and Indian fare all grouped together. It is also rumored that Jade offers a special “Sushi night” on some ships, but I never saw or heard of this and the buffet is so gross, dirty, and crowded that I wouldn’t be eating any cruiseship-sushi anyway.

Windjammer Review: Ick, Yuck, and a pile of muck.  We ate here twice (lunch once and breakfast on the final day) because my kids wanted to gorge on cookies. I had bad coffee, a bowl of cold/bland miso soup, and salad. I didn’t want to go anywhere near the food, or the people throwing elbows to get to the food any more often than I had to.

Sorrento’s Pizza (Deck 5, on the Promenade) – Pizza by the slice, tirimisu, beers, and a daily sandwich/calzone option.  The pizza wasn’t bad, there were plenty of tables, and the lines were minimal.  Most afternoons we’d meander down to Sorrentos and graze on a slice. We did have a moment of awkward when my son ordered a tirimisu and the attendant got mad at him for trying to order liquor underage … so there’s that (I guess they soak the lady fingers in rum instead of rum flavoring).

Café Promenade (Deck 5, on the Promenade) – Sandwiches, cookies, pastries, specialty blended coffee drinks, and free drip coffee was served here all day.  The options weren’t bad, the line was never too long, and they make some “adult” coffee beverages that were quite good.  We enjoyed afternoon tea here most days.

Room service – available for free until midnight, the room service menu was somewhat limited (burgers, sandwiches, and pizza) but the kids enjoyed ordering cookies and hot chocolate every night, and a couple times I ordered nachos and a cheese plate while we prepared for dinner, because, hey – it’s all you can eat, and I paid for it.

Options for an Additional Charge:

Highlights and low lights of the trip: 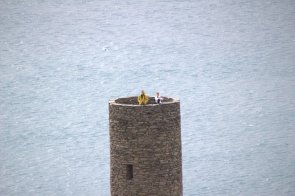 *SeaPass Card – the most obnoxious part of the cruise.  You receive the card when you arrive and it becomes your “credit card” throughout the trip, as well as your room key, and the card that gets you on the ship at each port.  The obnoxious thing about this card is that even if you buy the all inclusive unlimited drinks package, your card must be swiped for every drink you order, every bottle of water, and every cup of coffee – adding a few minutes of waiting to every transaction, followed by a receipt you have to sign.  Why not just give us a wristband and then use the SeaPass cards if an issue arises? Reason one out of 100 why I’ve decided I prefer the All Inclusive resort experience.

At a slim 5’3″ with long blonde hair I don’t exactly look like someone who “needs” to dine alone on a Saturday night. But, one can only eat so many bland Hilton lobby bar dinners – so eventually during every work trip I venture out for local cuisine.

Anyone who’s travelled alone extensively will tell you, making conversation with yourself over Fava beans and a nice Chianti (forgive the literary reference, one too many glasses of said Chianti) is about as boring as a Hilton Bolognese.

So, I cheat with these tips:

1. Eat at the bar – while others are waiting for their table you can nosh some cauliflower gratin and you might also get chatty with your barstool neighbor. If not, at least you’re surrounded by people to eavesdrop on.

2. Try out the hot spots – when it’s just a table for one most restaurants can accomodate you for the super early or super late shift (they know you won’t camp out for hours). Plus, when it’s just one person dining that chic spot becomes a lot more affordable.

3. Dress to Impress: Nobody can make you feel like a loner unless you let them. Dress up, just like you would for a date, make it clear that your decision to dine alone is your choice.

4. Bring a Magazine – when all else fails, read and ignore the world.